I want to thank each and every one of you for your support and interest in my research. No prize is worth more than seeing you all inspired with the excitement and importance of science. If you like to see me & my group keep "biohacking the diseases" for a better & healthier tomorrow, this is your chance to support us with your votes. Cast your Votes Now for Biohacker!

Favourite Thing: I simply love asking “Why” or “How” questions about nature and life. Finding answers is never easy but this is just part of the learning process. So learning by building is my favourite thing to do in science and by that I mean hacking biological systems to understand how they work, not hacking in the sense of infiltrating protected info or stealing but hacking in the sense of taking things apart and putting them back together or rebuilding in a better way to the benefit of environment.

Me and my work

Neurons play a crucial role in the regulation of cardiovascular and cardiorespiratory systems yet functional roles of different neuronal phenotypes remain unclear. In order to elucidate mechanisms underlying many neurological and cardiovascular disorders, a better understanding of the functional and the physiological role of specific neurons is essential. In my research, I take an entirely novel synthetic biology approach for selectively investigating the function and regulation of different types of neurons.

One of the greatest challenges in science has been selectively targeting a particular cell or a group of cells. To give a superficial example, in cancer research the question has never been “how to destroy” the cancer cells –as there all sorts of ways to kill a cell, instead the challenge has been “how to kill cancer cells without harming the normal cells”. Here I propose a cell-specific promoter system that enables selective targeting of any cell on the basis of particular genes that it expresses.

By definition promoters are special transcriptional elements that drive the expression of the genes they present on by initiating the transcription of that particular gene. So I build cell-specific synthetic promoters to express the gene of my interest only in cells that I am targeting. 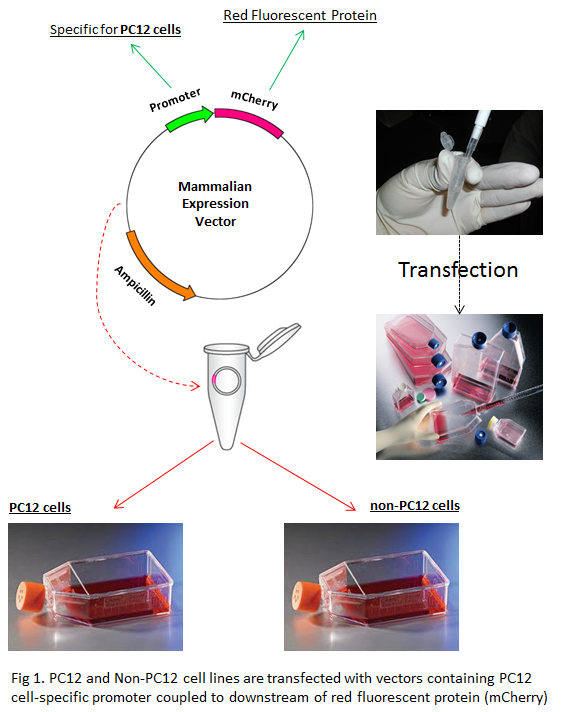 Using my cell-specific promoter system, I developed a 3-step approach to reveal the functional role of neurons in cardiovascular and cardiorespiratory systems. First, I selectively label the neurons of my interest using fluorescent proteins so that I can identify their location in the brain. Second, I selectively destroy this fluorescent-labelled neuron group to understand their specific functional role in cardiovascular and cardiorespiratory system. Third, I take an optogenetic approach to selectively stimulate the neurons of my interest to observe their projection patterns and role in cardiovascular diseases. Optogenetics is a very cool technique used to control the activity of individual neurons by literally shining light upon them. By applying this 3-step approach, I can thoroughly investigate the specific functional role of neuron with respect to cardiovascular and cardiorespiratory system. In fact, this combined approach has a very broad applicability and offers a novel strategy to better understand the underlying mechanisms of any cells in any system.

A key advantage of the approach that I briefly outlined here is that we combine targeted cell death and optogenetic stimulation/inhibition approaches using a neuron-specific promoter system that targets cells on the basis of particular genes that they express. This will lead to the development of a toolkit that will enable phenotype-specific knockout of cell groups in vivo; this is a long sought after goal in neuroscience research.

Here is a picture for those who are interested in understanding what sort of techniques I use in my project:

Fig 2. Experiments I frequently do in my research 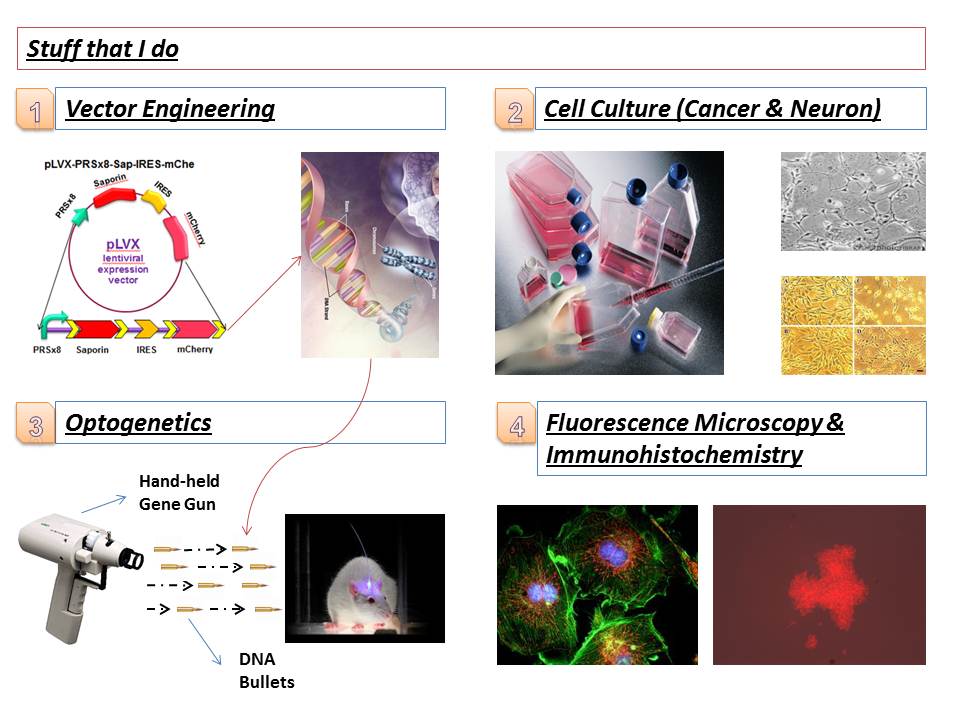 My work is definitely not boring, well sometimes it may get a bit hectic. But this is what I do to introduce more fun: synthetic aesthetics 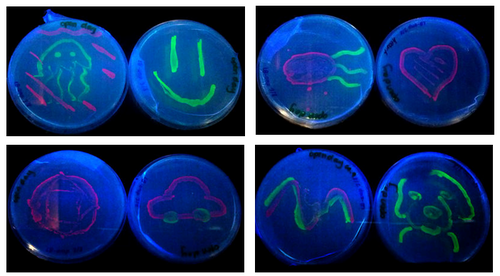 I engineer E.coli (bacteria) to do something funny, in this case (made my iGEM’12 students) you make them glow in all sorts of colours then paint pictures using E.coli. Isn’t synthetic biology awesome?

Fig 4. PC12 cells expressing red fluorescent protein under control of PC12 cell-specific promoter (a) and PC12 cells not expressing red fluorescent protein (b). PC12 cells are cancer cells which are derived from rat adrenal medulla (part of rat brain) they carry characteristics of neurons  but they can keep on dividing unlike neuronal cells. Targeted destruction of PC12 cells (C) using my synthetic promoter system (in this case synthetically engineered promoter is targeting PC12 cells) and control cells (D). Trypan blue is a stain which is taken up by cells if they are dead so you can see  I managed to kill almost 99% of PC12 cancer cells in (C). 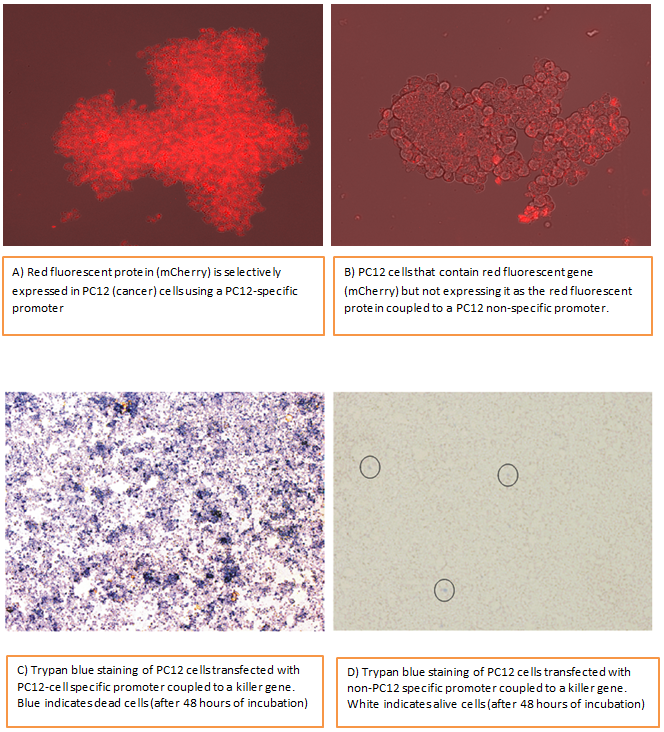 What I'd do with the money

iGEM is the premier synthetic biology competition run by MIT (Massachusetts Institute of Technology) where more than 200 teams from top universities of the world are challenged to design and test a biological system and operate it in living cells (such as making bacteria go and fix the leaks in pipes, biological  sketch pads, vitamin producing yeast or fuel producing bacteria etc…)

Meet our 2010 team who won a bronze medal: https://2010.igem.org/Team:Macquarie_Australia

One important aspect of iGEM competition is known as “human practice” which includes a vast variety of public awareness and engagement activities. In 2012, as a part of our human practice activity we visited several high schools in NSW to communicate hot topics in science to high school students. We also invited students from all ages to our labs in our open day. We had so much fun.

Fig 1. Science open day at Macquarie University: Visitors from all ages can have an opportunity to see real hands-on science and discover the 2012-model advanced biotechnology labs. 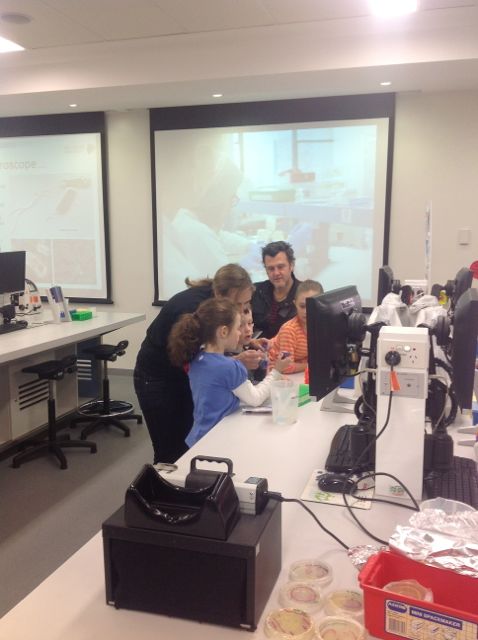 Fig 2. DNA made of Lego Bricks 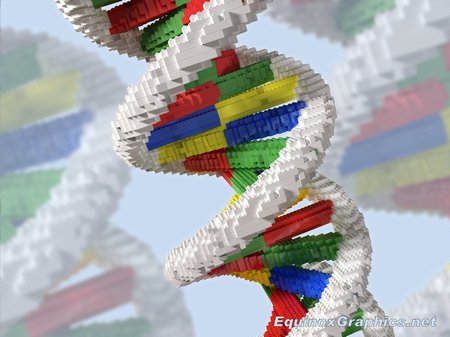 Do you like playing with Lego bricks? In synthetic biology, you can play with Biobricks to design and create many functional biological parts. 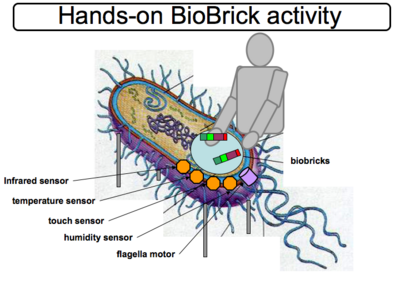 How would you describe yourself in 3 words?

Who is your favourite singer or band?

What is the most fun thing you've done?

If you had 3 wishes for yourself what would they be? - be honest!

What did you want to be after you left school?

Were you ever in trouble in at school?

What's the best thing you've done as a scientist?

I established the first-ever iGEM team(synthetic biology) in NSW

Tell us a joke.

I’ll tell you two – you choose which one is more stupid :)) – A neutron walks into a bar and the bartender says, “for you, no charge!” – What does a teenage boy and the enzyme helicase in common? – They both wanna unzip your Jeans/Genes